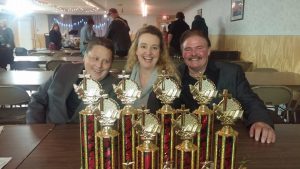 Our group is called The Greatest Gift. We are from Southern Maine. We are an evangelistic musical group with the sole purpose of evangelizing God’s Word to a world that so desperately needs to know our Lord and Savior.

Our group has been together for over 6 years with our newest addition, Krys Patterson on vocals. The piano player, Mike Biasin, and Pastor Wayne Patterson, the lead singer and songwriter, have been playing for 20 years together. We have comprised a catalog of songs.

In March 2016 we went to the North American Country Music Association International in Pigeon Forge, and won Gospel Band of the Year, Gospel Album of the Year, and a Horizon award for songwriting in all 50 states and Canada.

In March 2017 We went back to Pigeon Forge and took home 16 awards. To name a few, Gospel Band of the Year, Gospel Vocal Group of the Year, Most Promising  for Video of the Year, Instrumentalist of the Year, and more. On our way home from TN, we found out that our song The Lighthouse was #1 on the Southern Gospel Times Top 40 fan-based chart. It stayed at #1 for 3 weeks in a row.

April 2017: We came back for one more round at Pine Tree and DECMA, and again won  many awards, including Gospel Vocal Group, Gospel Band, Gospel Song of the Year, and more.

September 2017: We were invited to submit our music to The Akademia Music Awards, where we won the #1 Christian/Gospel Song of the month for the next four months!

March 2018: We went back to Pigeon Forge where we took home 17 awards. See the complete rundown on the Home page for full details on this year’s wins. We Give God all the glory for everything He has allowed us to accomplish.

August 26th 2018: The Greatest Gift went to the DownEast Country Music Association and took home 15 awards. The awards were:

Mike Biasin
Instrumentalist of the Year

New Church/Outreach Center: In March 2019, the trio opened a new outreach center called the Little House of Hope and Prayer, located at 1328 Main Street in Sanford Maine. At the Little House we hold services Sunday at 7pm, and on Thursday evening we have bible study at 7pm. Visit www.littlehouseofhopeandprayer.com for more information.